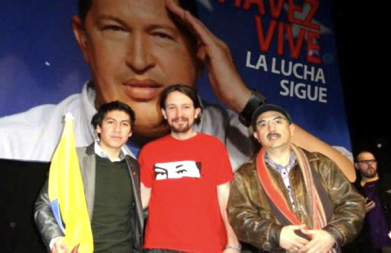 Who is Pablo Iglesias? What’s ‘Podemos’? These are probably the first two questions that have popped into your mind if you are not familiar with the Spanish socio-political landscape. Contextualisation is necessary before jumping into their relevance within the foreign policy framework. In very general lines, in January 2020, the Spanish Congress elected Pedro Sánchez as Spain’s new Prime Minister, resulting from the coalition between its party, the so-called ‘Spanish Socialist Workers’ Party’ (‘PSOE’) and the left-wing party ‘Unidas Podemos’.

I will focus on Pablo Iglesias, the incumbent Spanish Vice President and Secretary-General of Podemos since 2014. He’s all but an indifferent political figure – his anarchy extends all the way through his persona: from his anti-system views to his rebellious dress code in Congress. The former is especially true when analysing his dubious links to autocratic regimes. On the one hand, during the 2000s, Iglesias was profoundly involucrated in Latin American politics employed by the CEPS Foundation. This Foundation is a controversial Spanish NGO that aims at facilitating access to social and cultural capital across Europe and Latin America. He monitored the elections in Paraguay and Bolivia, and exercised his role as strategic analysis advisor for the Venezuelan government under Hugo Chávez, being openly friendly with the leader. On the other hand, the left-wing program Iglesias presented ‘Fort Apache’ was alleged to be financed by the autocratic Ayatollah regime of Iran. His partnership with this oppressive, religious regime was so incoherent that he had to host a meeting at the Unión de Juventudes Comunistas to give explanations on it. 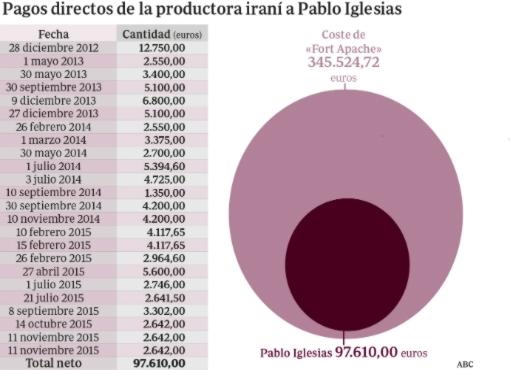 Iglesias has carefully crafted Podemos’ image as a democracy-loving party – a party ready to lend its infinite parachutes to save those who get hit by a capitalist, liberal economy. Fiscal reforms, subsidies, education, healthcare… are part of  Iglesias’ recurring discourse on the founding pillars of democracy. However, there is room for political cynicism.  Podemos was presumably financed with dirty money according to the ‘Informe Pisa’ presented to the Spanish Prosecutor in 2016. According to this report, funding came from regimes like those of Hugo Chávez, Nicolás Maduro or Mahmoud Ahmadinejad whose re-election caused the worst upheaval since the 1979 Islamic Revolution due to his Holocaust denial, his civilian nuclear energy support and missile development programme. The report, however, was dismissed by the Prosecutor.

Accusations of accepting illegitimate funds continued. In 2017  Iglesias was accused by Enrique Riobóo, owner of Chanel 33, of financing the European elections campaign of 2014 with “pockets packed with Venezuelan and Iranian money”. Riobóo, Iglesias’ former partner betrayed him when they came back from a trip to Venezuela and revealed how Iglesias had felt “frustrated” by the fact that Maduro would not give them as much money as his predecessor Chávez. While this accusation was little more than that, more facts followed.  Soon after Juan Carlos Monedero, Iglesias’ left hand, received a check for a value of 400.000 under the ambiguous concept of “consulting works”. This prompted  the Spanish National Police under the ‘Unidad de Delincuencia Económico y Financiera (UDEF) to start an investigation against Podemos due to illegal financing of their activities with five million Euros from the Tehran regime as well

While the ideological link between the leader and the regimes is undeniable, the investigation on funding was dismissed by Judge Alejandro Abascal who closed the case in 2016 followed by huge criticism for government manipulation and interference. Still, Monedero was forced to resign. Monedero, who had been the ideological and intellectual soul of Podemos, was definitely a victim of internal party politics. Even though he was the one responsible for receiving the 400.000 euros, he was also the one who was pushed away by his colleague Iglesias when the situation got smelly. Why did it get so smelly though? Since Monedero received this money from supposedly fraudulent activities, he did not declare it in Spain, hence ran into trouble with the Spanish Tax Authorities. In February 2015 he admitted the funds came from consulting with Venezuelan leadership, and in April he consequently resigned.

The biggest takeaway is the u-turn in the foreign policy tendency. According to Iglesias “the Latin-American experience helped [them] understand the need to break with degenerating politics” from an internal politics point of view. The ‘Chavist experience’ has gifted them with lessons that can be applied to the efforts of transforming European politics. However, there is nothing inspiring from Maduro or Ahmadinejad’s autocratic regimes to be applied in Spain, if we take into account that Spain’s foreign policy diverges from their ideals applied.
On the one hand, whilst Podemos doesn’t recognise Guaidó as the Venezuelan President, Spain, as a country, does. On the other hand, Spain as part of the EU and the UN favours sanctions against Iran over its nuclear programme and the lack of compliance with the Nuclear Non-Proliferation Treaty. Therefore, if Podemos and Iglesias wish to remain in power, they should detach themselves from the looming shadow of these regimes, rather than attempting to influence Spain’s foreign policy by benefiting from ideologically similar dictatorships.

Switzerland’s Mediator Status on an International Playing Field: What is keeping Iran and the US from Violent War

The First Female Head of Government in Europe- Margaret Thatcher